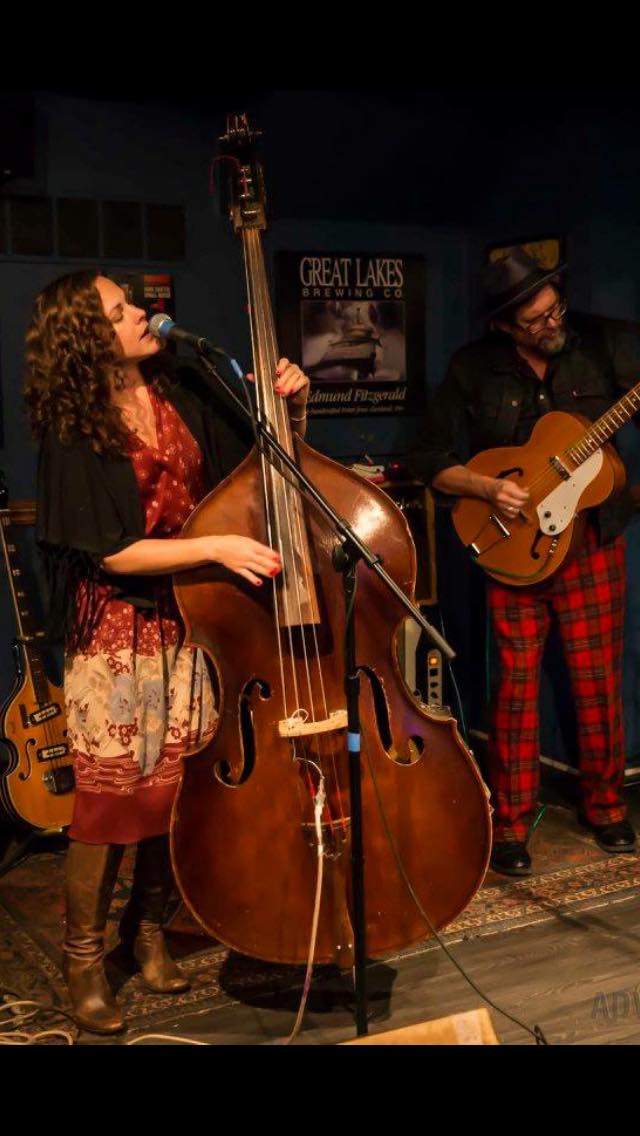 A burgeoning star, Amy LaVere is becoming renowned worldwide for her songwriting, bass playing, and vocals. She sings with a sweet, haunting voice that can turn on a dime from innocent to lusty (“Norah Jones with an added Cyndi Lauper element” — Mojo Magazine; “Spookiness suits her” — New York Times). Whether playing as a duo with her husband Will Sexton or with retro-country sensation Motel Mirrors, she’s an inventive, thoughtful singer-songwriter who has crowds throughout the US and Europe smitten.

Music fans first discovered this “sweet soprano” on This World is Not My Home in 2005, but it was her Jim Dickinson-produced breakout albumAnchors & Anvils two years later that put Amy LaVere on the map.

The success of Anchors & Anvils drew the attention of the UK market, and soon Amy was invited to perform on the BBC’s “Later with Jools Holland” – the appearance introduced her to an international audience, and to Craig Silvey (Arcade Fire, Jamie Cullum), who she’d later team with to produce Stranger Me (Archer Records).

Spin called the 2011 release “the break-up album of the year,” Paste said it was “among the year’s best,” and it earned a first listen feature from NPR’s All Things Considered. She followed it in 2014 with another critical smash: Runaway’s Diary, a concept album based on her own experience as a teenage runaway, produced by Luther Dickinson (North Mississippi Allstars). American Songwritercalled it “boundary pushing… heartfelt, reflective, challenging and consistently compelling.” NPR Music’s Robert Christgau said it was her best yet.

Her most recent release, Hallelujah I’m A Dreamer (Archer Records, 2015), was a surprise for fans just nine months after Runaway’s Diary, recorded with LaVere’s husband and noted guitarist Will Sexton. On Hallelujah, Amy and Will capture the immediacy of the live show they developed on the road together, reveling in a more stripped-down sound and celebrating the freedoms and limitations that come with it in stunning form. No Depression said simply: “pure bliss.”

In addition to her solo records and a tireless touring schedule, Amy enjoys collaborating with other artists. In 2012 she joined an all-star collaboration called The Wandering, composed of Amy, Luther Dickinson, Shannon McNally, Sharde Thomas and Valerie June. They released Go On Now, You Can’t Stay Here (Songs Of The South, 2012) to critical acclaim and sold out shows.

In the afterglow of The Wandering, Amy and Shannon McNally hit the road together and released an EP titled Chasing the Ghost, The Rehearsal Sessions (Archer Records, 2012) which featured songs from both artists recorded live during rehearsals for the tour.

Amy next paired up with noted rocker John Paul Keith to create Motel Mirrors.  Their styles clearly complemented one another, which made for magic on stage and in the recording studio. Their eponymous vinyl EP release was named one of the “10 Essential Albums of 2013” by No Depression.

Although she’s a singer and songwriter first, Amy is also an actress. In 2005 she was cast in the role of Wanda Jackson in the Johnny Cash biopic Walk the Line (Twentieth Century Fox).  Since she has appeared in a variety of independent and studio productions:  Black Snake Moan (Paramount, 2006), $5 Cover (MTV, 2009), Woman’s Picture (2011) The Romance of Loneliness (2012) and most recently with Grace Zabriski in Only Child(2015).

In 2017 Amy is keeping a busy tour schedule and writing songs for a new album to be recorded later in the year.  Watch for a new Motel Mirrors album to be released on Last Chance Records in the spring of 2017.