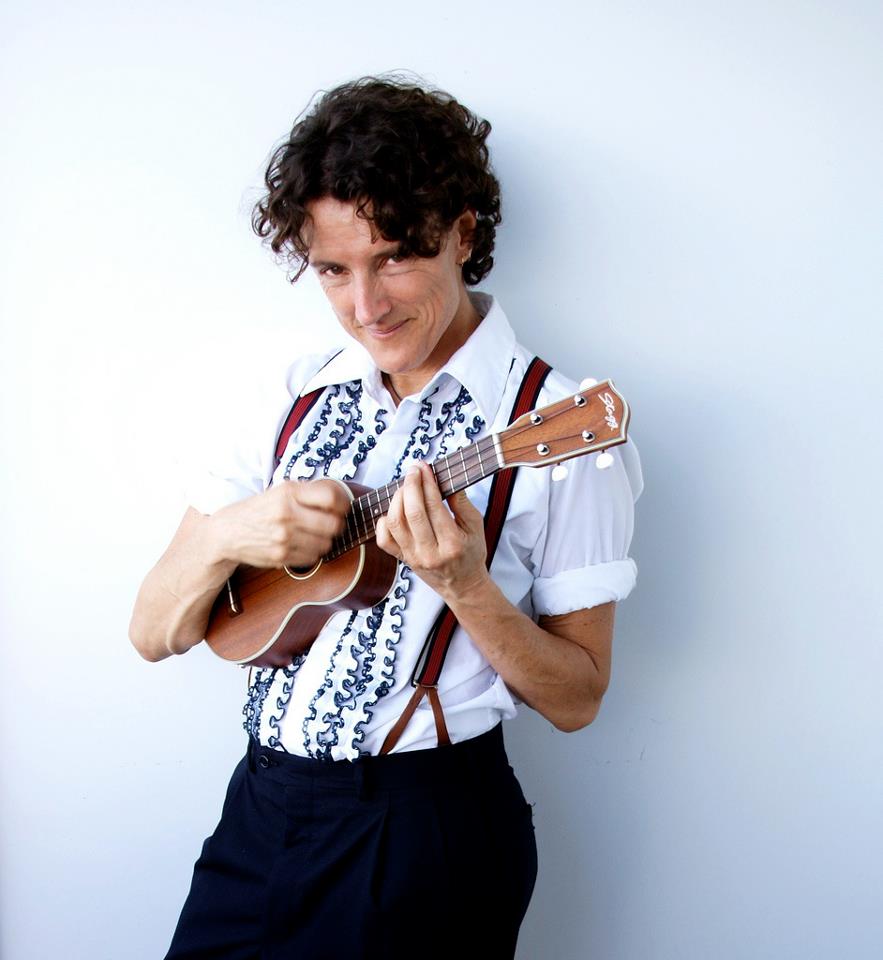 ZOË LEWIS is a band in a body! She plays jazz, jump jive, latin grooves, swing, international folk, funk originals on anything from the piano to the spoons! Troubadour, vaudevillian, storyteller, adventurer, singer-songwriter! WINNER of the Colorado Rocky Mountain Folks Festival Troubadour Award in 2003, NEW FOLK WINNER 2002 at the Kerrville Folk Festival in Texas and 2001 Falconridge Folk Festival AUDIENCE FAVORITE.

Her song SMALL IS TREMENDOUS received much commercial success and can be heard on ads for MINI PRINGLES and TJ MAAX. Another of her songs: SHEEP was part of a PUTUMAYO compilation and became #1 in the children's satellite radio charts. She's also written the soundtrack for a documentary on the VAGINA MONOLGUES and scores for several other films.

Originally from England, she now resides in Provincetown on Cape Cod, MA, where she performs every summer. Her music is upbeat, amusing and perfect for young and old alike. She's traveled around the globe to over 70 countries, picking up world-beat grooves and stories on the way; jumping box cars, riding on freight boats and has even played music with an elephant orchestra in Thailand. "Her fast-paced lyrics poke fun at modern society and praise the rambling delights of childhood, secret worlds, and wandering love". She has performed across the USA, Europe, Australia, Canada and works for OLIVIA cruises.

In 2011 ZOË penned her first piece of musical theatre, a valentine to Provincetown about bicycles, dreams and true love entitled SNAIL ROAD. It was a huge success with sell out shows for 3 runs in the Provincetown ART HOUSE. It was directed by Broadway's DONNA DRAKE (from the original cast of A CHORUS LINE). In 2013 she produced her second musical ACROSS THE POND, also directed by DONNA DRAKE, at the Provincetown Theatre. In this piece a delightful array of passengers contemplate the definition of "home" high in the clouds and examine the difference between the U.S. and British cultures. She turned the entire theatre into an airport and the stage into an airplane cabin and performed to sold out houses. ZOË also runs a 1920's SPEAKEASY evening all summer long which features Prohibition era jazz and takes the audience back in time to the golden age of the flapper. It's community theatre at its very best and includes 20 guest crooners each show, 1920's apparel and a stellar band. In 2013 she was voted PROVINCETOWN WOMAN OF THE YEAR.

ZOË started studying music (piano) in England at the age of seven in her little village on the south coast of England, Rottingdean. She began performing professionally with London Latin jazz ten-piece band AVANTI in 1986. The band toured the UK and cut a record. She went solo in 1988, performed piano / vocal jazz standards in London pubs and later worked in South America and in the Caribbean.In 1990, she arrived in the United States and began performing originals on guitar, piano, harmonica, ukulele, penny whistle, accordion, and human trumpet and has since then toured extensively, performing at numerous folk clubs, coffee houses, colleges, music festivals and pride marches. She has taught songwriting workshops at festivals and in schools Her workshop "Music in our Pockets" encourages people to redefine their meaning of music; there's music on the streets, on our bodies, in nature, even in our pockets if only we open up our ears. Loose change, a set of keys can be used to make wonderful noise. With the help of African calabash, Jamaican steel pans, gourds, coconuts, trash cans, thumb pianos, conch shells and musical saws she demonstrates the point!